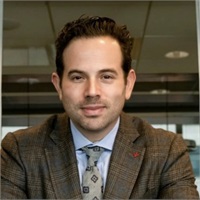 David began his professional career in the mortgage industry after graduating from Ithaca College in 2001. He spent multiple years learning the mortgage market before deciding he wanted to help his clients on the other side of their balance sheet.

In 2004 David became a Financial Advisor with Morgan Stanley. He excelled through their training program and after two years at the firm, he decided it was time to break out on his own. In 2006 he opened up a Wachovia Securities franchise office in NJ. Taking an independent approach allowed David to flourish in creating his vision of goal-driven investing. Rather than a one size fits all model, David hand crafts each portfolio to fit his clients goals and objectives.

While David enjoyed working with Wachovia Securities, the bank got itself in trouble with poorly underwritten mortgages during the housing crisis in 2008. In 2009, David decided to leave Wachovia to shield his clients from potential collateral damage that could result in the bank’s failure. Rather than go to another big Brokerage firm that pushed proprietary products, David decided to join independent broker dealer, Ameriprise Financial, in 2009. As a Financial Advisor/Franchise Owner, David spent more than 7 years fine-tuning his business and concentrating on the clientele he worked with. This concentration allowed him to ensure the white glove service he insisted his clients become accustom to.

After over 12 years in the investment management business, David decided it was time to break away from the "mainstream" broker dealer and have full autonomy by affiliating with a RIA. In 2016, David started DSG Wealth Management, an independent and professional investment management firm. By becoming an independent Financial Advisor, David gained the ability to continue to offer his clients both world class service and investment advice without big company influence. David strives to put his clients’ interests first. He looks at himself as the shield between them and the big Wall Street product-driven culture.

Through DSG Wealth management, David will continue to work with high net worth families, assisting with their financial goals. He personally builds every portfolio with the goal of achieving client objectives while mitigating unnecessary risk.